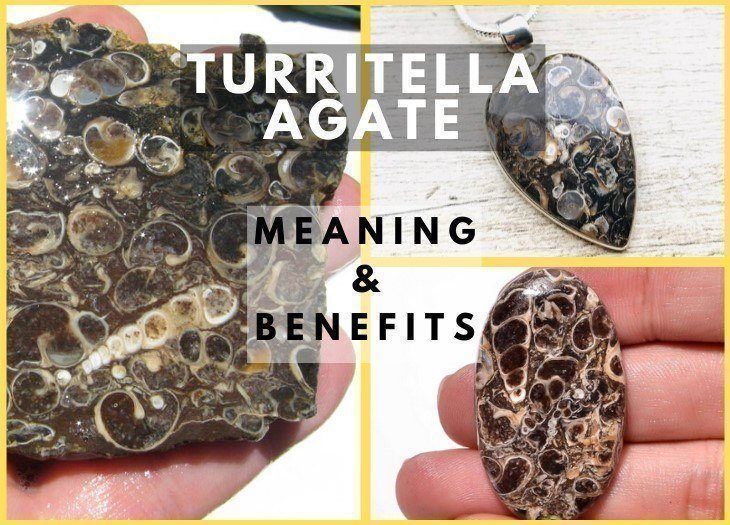 We’ve talked about Moss Agates and Dendritic Agates as stones that encourage growth and abundance, respectively. It’s quite amusing to note that the variety of Agate that’s actually involved with the earth and roots/home is another stone entirely.

Turritella Agate is a spiritual crystal that’s deeply connected to the earth and the concepts of home, roots, and ancestry. It’s a potent Base Chakra stone that helps a person survive and power through difficult life events. It also protects its owner from any harm.

This stone has pretty powerful spiritual qualities because it connects the owner to ancient wisdom and healing. It does so by establishing a strong connection with past worlds and past lives of all living things on earth.

This stone has a pretty timely use too—it’s said to have enough power to help heal the planet from pollution and neglect. When buried in a particularly negative or dirty place, it’s said to reinvigorate that space and infuse it with healing energy and protection.

What Are the Healing Properties of Turritella Agate?

Turritella Agate is well-known for its protective properties. It’s said to eliminate fear and protect against any kind of danger. For travelers, this stone protects them in their journey while maintaining a connection to their loved ones at home.

As for its emotional and mental healing properties, Turritella Agate functions like other Agates in that they promote stability and maturity in the face of troubling times. It also humbles those who have problems with their superiority complex and pompousness. But most of all, it helps dissolve negative thoughts and desperation.

Turritella encourages balance and healing in times of hardship and pain. It’s a stone that relieves a person from their past grievances that prevent them from building happy and healthy relationships. This is a stone that wants its owner to be secure and confident in themselves and in general, just be happy and secure with their lives.

What Are the Chakra Healing Benefits of Turritella Agate?

Turritella Agate is a potent Base Chakra stone. Remember that the Base Chakra is the center and basis of all spiritual and bodily functions. Not to mention, it’s also the place where a person establishes a connection with the corporeal world and existence. This is the chakra point that influences a person’s feelings of safety, security, and contentedness.

That’s why its grounding and calming properties make it a gentle Base Chakra healing stone. It doesn’t promise security and contentment right off the bat. Rather, it gives one the tools to find their own path to safety during troubling times.

Turritella Agate is not a traditional nor a natural birthstone, but it’s the Zodiac stone for Gemini (May 21st– June 20th), just like all its other Agate brothers and sisters.

Another thing about Geminis that I love is that they can breathe new life into a seemingly boring routine. They’re also very adept at reading the mood and supporting those who might have trouble expressing themselves.

But sometimes, they can be a bit gossipy and untrustworthy. Sometimes, the can even get very unstable and volatile. The worst-case scenario is that they have actual difficulty empathizing with others. But that’s where Turritella Agate comes in. As it balances the Base Chakra, it helps pull the flighty Gemini onto the ground and keep them in reality.

Turritella Agate vibrates with the energy of the water and wood elements.

Water governs the cycle of life. It’s also the element of stillness, quiet strength, and purification. Stones with strong water element energy can be placed in spaces for rest, reflection and prayer, or in the North area of a room or home to positively influence the “Career and Life Path” area.

On the other hand, the wood element is the energy of growth, new beginnings, and health. It’s a particularly nourishing element and it jives with the water element pretty well. You can use your Turritella Agate to enhance your dining space, or a room you use for new projects. This element is associated with the East and Southeast areas of the home. You can also place your stone in the “Family and Health” area as well as the “Prosperity and Abundance” areas.