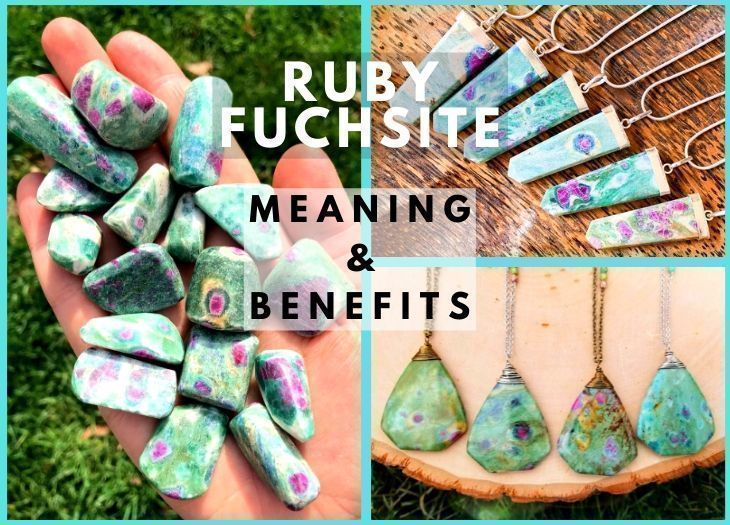 What Is Ruby Fuchsite Stone Good For?

The Ruby Fuchsite gemstone is a beautiful green crystal from the muscovite mica family. The chromium element in the stone accounts for its light green color which is available in different shades as well. The Ruby Fuchsite meaning is all about love and compassion, providing energy that will refresh your emotional body.

Ruby Fuchsite benefits include its healing properties, balancing the heart chakra and bringing about positive energy.

What Are the Healing Properties of Ruby Fuchsite?

Were you born between 20th January and 18th February? If you are an Aquarius, it’s likely that you are an introverted person. However, your high intellectual ability means that you are a bright person with lots of positivity.

The Ruby Fuchsite is a crystal of Aquarius because it shares the same properties of optimism and positivity. It will allow you to surround yourself with positive energy, aspiration and peace. Ruby Fuchsite is known to be one of the most powerful gems in the entire world so it is definitely worth the investment.

The number 9 has the personality of an Aquarius. It is identified by attributes like care, tenderness and thinking quietly before taking action. The number 9 is also known for letting things be and accepting things as they are without trying to change them.

People who have the personality of this numerical vibration are honest, sometimes even too much. However, they are also intellectual so if you know a person with a number 9 personality, it’s best to take their advice in difficult situations.

This sums up the numerical vibration of 9 to be easy-going, compassionate, truthful, empathetic, problem-solving, brilliant and those with wisdom.

However, experts also relate the number 9 to negative characteristics such as lacking the ability to concentrate on things, disconnect and laziness. Do you feel your personality relates to this numerical vibration?

The Ruby Fuchsite gemstone is connected with the energies of Earth and Mercury.

Mercury is linked to communication, socializing, expressiveness and logic. So in one word, the planet is known as a ‘messenger’, one that shares and communicates knowledge with others. Even though it’s the smallest planet in the solar system (after Pluto), it plays a pretty important role.

Its expressive characteristic helps turn thoughts into words, especially for writers (I would know). The planet is connected to different Zodiac signs like Virgo and Gemini, but this depends completely on its position while orbiting; it only stays with one zodiac for around 3 weeks or so.

An interesting fact that occurs as a result of Mercury shifting zodiac signs is that when it orbits the Earth (usually around 3-4 times a year), its communication properties get messed up and it goes into what astrologists call a ‘retrograde period’, one that is full of negativity.

Earth, on the other hand, is associated with humanity because of course, it is the only planet with humans and life. It lights up the dark parts of our lives and helps us to see things that we oversee. Earth is also known for offering a viewpoint and solutions when facing tough situations.

Ruby Fuchsite stimulates the Heart and Base (Root) Chakra. When you place the gemstone on the chest, it will open up your heart and receive information which helps you to enhance your psychic abilities. By meditating with it, Ruby Fuchsite will help align your Heart Chakra with its healing properties and benefits that allow you to connect your thoughts with your heart.

Ruby Fuchsite and The Elements:

So, we talked about the earth as a planet and its connection to Ruby Fuchsite, but the gemstone also belongs to earth as an element. As compared to the other 3 elements of water, fire and air that are elements of nature and life, the earth is a fundamental element of our body.

The earth corresponds with the properties of growth, success and wealth (not always in monetary form). If you use Ruby Fuchsite or any other crystal that is associated with the element earth, it will provide you with benefits such as concentrating your energy in one place so that you can stabilise it, growing plants, increasing fertility, improving strength and achieving success and money.

If you own crystals like Amazonite, Bloodstone , Jasper, Emerald, Obsidian, Black Tourmaline, Black Agate, Green Jade or Hematite, you can enjoy all these benefits because they also belong to the element of earth. You can check out the full list of all crystals with ties to the earth element here.

It takes an experienced gem collector and user to know the art of activating their healing properties. Luckily, a bit of research and articles like these will help you get right on track as well. Here’s how you can use your Ruby Fuchsite gemstone to manifest its healing properties:

How Is Ruby Fuchsite Formed?

Fuchsite is mined from metaphoric rocks such as schists and phyllites. Its rarity occurs from the fact that it is usually found in small grains throughout the metaphoric rocks and hardly forms proper rocks which is perhaps why it is very soft in nature.

Again, Ruby is also found in Fuchsite occasionally. This element is known as corundum crystals. Only when they are bright red in color, the gemstone is called Ruby Fuchsite. This rare occurrence is showcased at different gem, mineral and rock shows worldwide. This is because they appear a beautiful red-green color with a unique hexagonal shape that can be refined into objects and other shapes.

If you’re looking to buy good quality crystals for yourself or a loved one, the best Ruby Fuchsite jewelry and gemstones are found in India, Brazil and South America. In fact, India boasts fuchsite crystals with naturally formed rubies within them, something that is extremely rare and high in demand.

However, if you do not live in these countries, fortunately, you can find Ruby Fuchsite crystals all over the world.

What Is the Difference Between Ruby in Fuchsite vs. Ruby in Zoisite?

As explained above, Ruby in Fuchsite is formed by bright red corundum crystals. On the other hand, Ruby in Zoisite is called anyolite. The gemstone was first found in Tanzania by a British prospector named Tom Blevins. Ruby Zoisite only includes opaque Ruby as well as a mineral called black hornblende. The gemstone varies in color which is similar to that of Ruby in Fuchsite.

However, one major difference in both is the hardness. While Ruby Fuchsite ranks 2-3 on the Mohs scale for hardness, Ruby Zoisite has a durable hardness ranking of 6.5 to 7. This difference stems from the fact that Zoisite does not include pure Ruby which is the case with Ruby Fuchsite.

Below is an image of Ruby Zoisite (left) and Ruby Fuchsite (right). As you’ll quickly notice, Ruby Zoisite has black specks along with specs of Ruby. You don’t see those same dark specks in Ruby Fuchsite. In fact, you often will see an aqua or ivory-colored ring around the ruby in Ruby Fuchsite. I hope this picture really makes it clear to you how to distinguish the two crystal types.

If you want to learn more about Ruby Zoisite, check out this post here.

So, this sums up Ruby Fuchsite. The gemstone is popular for those looking to buy it for self-love, healing and developing positive relationships. If you’re in need of a crystal that offers healing properties and these characteristics, Ruby Fuchsite may just be the perfect choice for you. In fact, even if you’re not looking for the above mentioned benefits, you can always purchase it from countries that have the best pieces available and sell it in your home country for a higher price. Think of it as an investment that’ll get you enough profit to whisk off to another vacation after this pandemic is over!