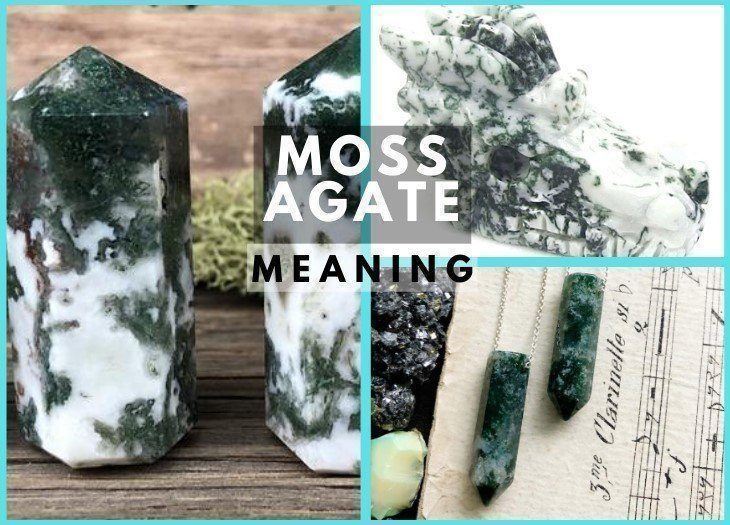 Green Tree Agate and Moss Agate are two stones that are sometimes lumped together in the same basket. They look so similar that it’s sometimes hard to tell the difference. Remember that Agates are transparent to somewhat translucent with distinct bands or other inclusions. Moss Agate is a “true” Agate with transparent to translucent, milky coloration and tendril or moss-like inclusions. Green Tree Agate, on the other hand, is an opaque, white jasper with green mossy inclusions. Some would even argue that Green Tree Agate isn’t even an Agate, but it’s still in the same stone family. However you want to call it, the meaning and healing benefits of both stones are the same.

Moss Agates’ base color is often transparent to a translucent-milky color. This stone can have spots or inclusions of manganese or iron that seem to grow like lichens or moss inside. Sometimes, these inclusions may be red, dark green, or blue.

Moss Agate is widely known as the stone of gardeners and agriculture because of its deep connection with the earth. But like other Agates, this stone also vibrates at a lower and slower vibrational frequency. Despite this, this stone is highly recommended for its stabilizing and strengthening influence and energy.

What Are the Healing Properties of Moss Agate?

There are many things that can keep a person stagnant in life. These may include accidents, unexpected disasters, and disease. But that doesn’t mean a person can’t get out of a rut. Sometimes, you just need a gentle nudge to point you in the right direction.

Moss Agate is a stone that symbolizes new growth and beginnings. It’s intimately connected to the land. As such, it not only supports endeavors like gardening and the likes, but it also helps you stay grounded. Being grounded doesn’t only mean that you’re aware of reality and the current situation you’re in, being grounded also means that you’re feeling safe, whole, and secure. Moss Agate gives you that and more.

Because of its intimate connection to the earth, Moss Agate also has the ability to clear personal energy, as well as that of the environment or specific spaces. It gets rid of deep-seated fears and stress and replaces them with security and belonging. It gives stability when there is turmoil, and it also strengthens positive traits like one’s ability to get along with other people nicely.

Moss Agate connects you to the innate spirituality of everything that exists on this earth. This stone may also help you remove karmic attachments to your past lives, which may also be a contributing factor to recurring problems in your current life. As Moss Agate keeps you connected to the spirit of the earth, it also raises your consciousness so you can communicate with the spirits of nature.

What Are the Chakra Healing Benefits of Moss Agate?

Moss Agate is an excellent Heart Chakra stone because it removes blockages and helps balance the heart. The Heart Chakra is the seat of our emotions, but it’s also where we draw the pattern for our relationship with ourselves and other people.

A balanced Heart Chakra means that we’re free to accept the cyclic and sometimes fleeting nature of relationships. Get it out of balance, and you’re in for trouble. Some would find themselves being controlled by their partners of being too controlling of their partners. Some have strong, and sometimes unnecessary, emotional responses. Overall, Moss Agate can help people realize the fleeting but beautiful nature of love in all its forms.

Moss Agate is not a traditional birthstone, but it is a natural birthstone for those born during the heart of spring, between April 20th and May 20th. Moss Agate is said to bring renewal and success in new ventures. It also gives good health to its owner.

Like all Agates, Moss Agate is the Zodiac stone for those born under the Zodiac sign Gemini (May 21st– June 20th). Geminis are quick thinkers and are often the life of the party because of how they conduct themselves in the company of friends and strangers. But they can also be affected by nerves and extreme moods. Moss Agate will definitely help them calm down in bad situations and prepare them for the healing and nourishment that they need and deserve.

Moss Agate possesses wood energy in Feng Shui. Wood energy is the energy of growth, expansion, new beginnings, and health. Stones that have wood energy are known to bring abundance and growth to the owner.

You can use your Moss Agate stone to enhance any space used for eating or any space where you’re beginning a new project.It helps boost your creative energy and drive to finish the project. Wood energy stones are associated with the East and Southeast areas of the home, too, which are also known as the “family and health” area and the “prosperity and abundance area” respectively.

Tribal priests used Moss Agates to heal people because it gave them the ability to interact with a person’s organic system. Agates are known to be the most powerful of medicines because they’re gentle and soothing.

Moss Agates were also once used to clear poisons from the body and to protect against venomous reptiles.