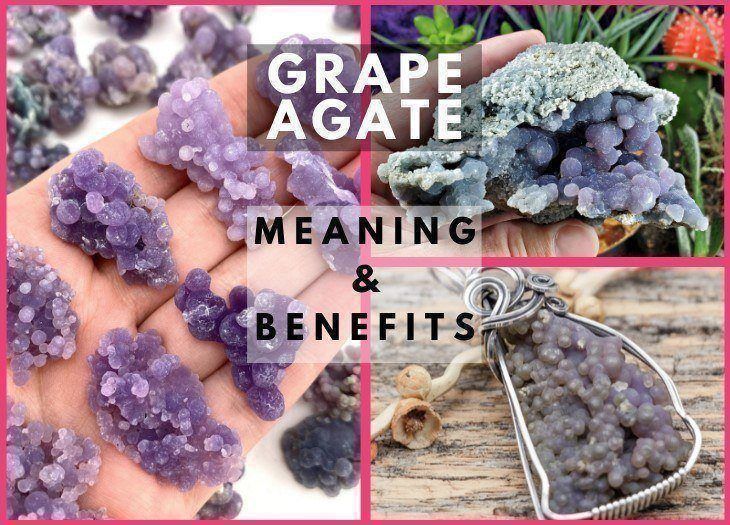 Fairly new to the Agate family, Grape Agate was only recently discovered in Indonesia and is mined only in that locality so far. Grape Agates are Botyroidal purple chalcedonies, which mean that instead of the usual structure of Agate, this variety of Agate occurs in grape-like formations. Because of their appearance, color, and locality, these Agates are considered to be extremely rare and valuable.

Grape Agate occurs in colors from dark purple to lilac or lavender, but sometimes green Grape Agates are also found among purple ones. There are also bi-colored green and purple pieces found, but these are among the rarest colors. As such, if you want to procure your own piece, you have to make sure that you source it from an authentic and credible dealer. Sometimes, barely purple Grape Agates are dyed and passed off as authentic.

What Are the Healing Properties of Grape Agate?

Because of its purple color and the shape in which it occurs, Grape Agates are known to vibrate at a higher frequency. This means that this stone is particularly helpful for people who engage in higher, metaphysical endeavors like mediums, scribes, and therapists. Grape Agates are said to connect people with a higher, divine voice—perhaps that of their guardian angel, their spirit guide or other powerful beings not from this world.

Grape Agate is the stone of internal and external expansion. On one hand, It helps strengthen one’s connection with their higher self. Grape Agates are said to imbue their owners with the gift of intuition, knowledge, and self-discovery—helpful tools for introspection and meditation.

On the other hand, Grape Agate also expands one’s consciousness towards the truth and wisdom of the universe. It transforms the self into its higher form so it can constantly be aware and live in the present. Some people use Angelite, Phenacite, or Selenite to help enhance the powers of Grape Agate during meditation and reflection.

What Are the Chakra Healing Benefits of Grape Agate?

There are 7 chakra points in a person’s physical body. But outside the body and into the fourth dimension exists the other 7 chakra points that govern the expansion and consciousness of the soul that resides within the corporeal body. These chakras are known as the Etheric Chakras.

Grape Agate is particularly beneficial for the Crown and Third Eye Chakras which govern intuition and universal connection. However, it also enhances one’s Etheric Chakras in ways we might not fully comprehend yet.

Grape Agate unlocks psychic abilities, including the ability to interpret dreams and to heal one’s soul through dreams. Aside from that, Grape Agate also promotes clarity and vividness when healing through dreamwork and in the corporeal world.

Grape Agate is not assigned as a natural or traditional birthstone, but it is beneficial for two Zodiac signs—Cancer and Sagittarius.

Cancers (June 22nd– July 22nd) are probably the most emphatic among the 12 signs and that’s because they’re always in touch with their emotional selves. They’re strongly connected to their families and homes and are very intuitive. Grape Agate can help Cancers overcome their indecisiveness, moodiness, and suspicions by raising their mind to a higher state so they can see things from a bigger perspective.

On the other hand, Sagittarius (November 21st – December 21st) are confident, fun-loving people who always seek the thrill of adventure. They love traveling and exploring most of the time and are always eager to learn. However, Sagittarius natives aren’t grounded most of the time and can lack focus. Grape Agate enhances their intuition and mental faculties to help them manage these negative traits that can affect their relationships with other people and themselves.

Nine is the number of universal love. This is the number that governs everyone who are considering humanitarian professions. This number also symbolizes loyalty, humility, and brilliance. Because of its connection with higher planes and higher levels of consciousness, this number also signifies the search for one’s spiritual purpose and enlightenment. Taken to the extreme, 9 can mean disconnect from corporeal reality and inability to concentrate and focus.