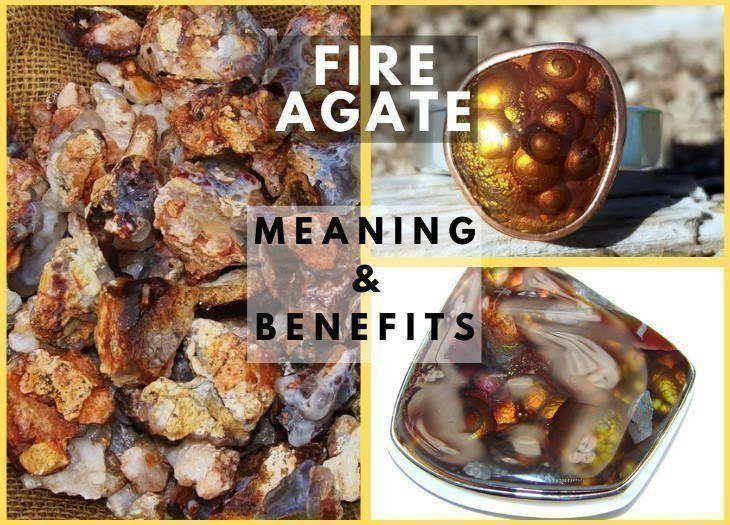 Burning with the light of the sun and the stars, or sometimes the moon and the sea, the Fire Agate is truly a precious crystal to behold. Its deep brown color with iridescent flashes of green and gold earns it the name Spiritual Flame of Absolute Perfection.

In alchemy, it’s used to conjure up fire and light. In religions of old, it’s used to serve and please the fire deities. For them, this stone is the manifestation of divine guidance through action. The flames within this wonderful stone perhaps hold an urgent message from the universe to the owner.

For healers, this stone encourages deep passion and love. For some, it helps uphold high standards of behavior for oneself and for others. For others, this stone holds the light with which they can see the implications of their decisions in unclear circumstances.

What Are the Healing Properties of Fire Agate?

The beautiful Fire Agate is said to be the stone of integrity. The fires buried within the stone are said to help a person stay true to their word with their actions. Like most Agates, this stone also provides inner stability, composure, and maturity. In addition, this is a stone that doesn’t just endow a person with love and passion—it helps them reconnect with their deepest desires and wishes in life.

Not only that, after reconnecting you with your inner desires, this stone is said to give you the courage to pursue whatever it is you’re going after—whether it be your passion, your dream job, or an important sales deal. However, Fire Agates can also temper our desires for things we don’t need. The stone discerns the kind of boost we need in things we ask of it. Fire Agates also have a reputation for stimulating sexual and physical energy, which can be attributed to their chakra healing benefits, though more on that later.

As for its mental benefits, Fire Agates lend courage and confidence in new endeavors. It also prevents you from feeling exhausted or discouraged if things don’t go your way. In addition, it helps its owner overcome bitterness and anger. Though for some, Fire Agates have also proven itself to be effective in motivating its owner to fight addiction.

What Are the Chakra Healing Benefits of Fire Agate?

Fire Agate is particularly potent in stimulating the Base Chakra, the Sacral Chakra, and the Heart Chakra.

We’ve pretty much discussed both the Base and Heart Chakras. But to sum it up, the Base Chakra is the seat of one’s physical movement, security, and connection with the earth and corporeal existence. Meanwhile, the Heart Chakra is responsible for relationships, love, and understanding of the self and the people around you. If the two of them become unstable, it can spell disaster for one’s relationships with other people and the self.

The Sacral Chakra, on the other hand, is the second chakra located below the navel and above the pubic bone. This is the body’s center of gravity and energy. This is where a person’s life force is perpetuated and balanced. This is also where one’s gut feeling emanates from.

A balanced Sacral Chakra means that a person has passion and enthusiasm for life. There’s also ample energy for expressing one’s creativity and sexuality. If this chakra point is out of balance, a person may feel confused all the time, or he may depend heavily on others. That’s why a fiery stone like Fire Agate is helpful in bringing back the luster and sexual energy that all people need.

Fire Agates are neither natural nor traditional birthstones because of its mixed colors and unique iridescence. But it’s particularly helpful for Geminis (May 21st– June 20th) who may have trouble keeping their word and keeping other people’s secrets. It can also help Geminis with their mood swings, as it stabilizes their highly active minds and/or imaginations. But Geminis are lovely people because they get along well with almost everyone and they’re not afraid to listen and impart their vast emotional intelligence.

Fire Agates radiate the energy of the wood, fire, and earth elements.

Fire energy is the energy of warmth, brightness, enthusiasm, and activity. Placing a Fire Agate in the South area of a home or room can influence the fame and reputation area of your home. Fire Agates will give you that boost to help you get ahead in your community and your family life.

Wood energy, on the other hand, is the energy of growth and new beginnings. This element is responsible for the East and Southeast areas of the home, which is also known as the Family and Health area, and the Prosperity and Abundance area. Though, you can also place a Fire Agate in the place where you dine or start a new project to help boost your health and bless your new endeavors.

Historical records show that Fire Agates were used to conjure fire in Alchemy, because of the supposed flames trapped within the gem. But people have been known to use this stone as a talisman against serpents and storms, much like how most other Agates are used.

Some even say that Fire Agates are particularly potent cures for insomnia. It’s also said to protect children from disease and harm. Some even say that it strengthens one’s resolve and heals deep-seated fears.