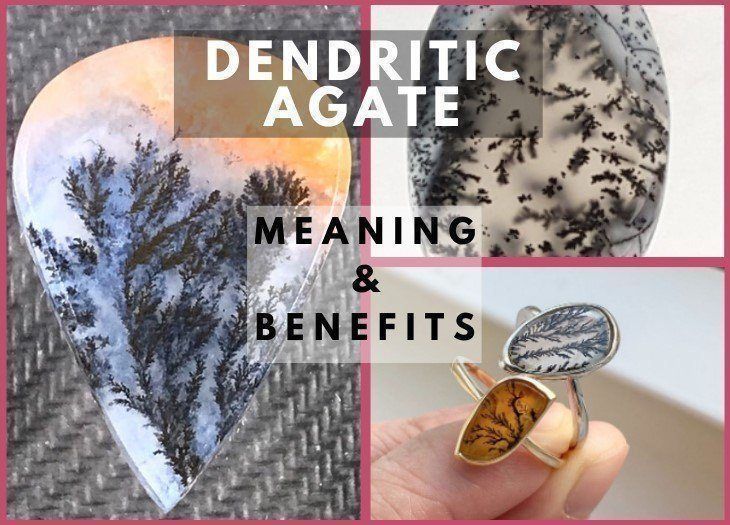 If Moss Agate is the stone of new beginnings, Dendritic Agate is the stone of plentitude and wealth. From the Greek word meaning “tree”, Dendritic Agate is a variety of agate with tree-like inclusions against a transparent to translucent, milky-white background. This stone has been associated with dryads—tree and woodland spirits in Greek myth. Trees are symbols of growth, wealth, abundance, strength, and pride.

Just like some Agates, Dendritic Agate is said to encourage and strengthen marital fidelity. But it’s pretty well-known that this stone is known to bless endeavors ranging from business to agriculture. Burying it in a field during planting season is said to ensure a plentiful harvest. Still, some others believe that this stone clears the stagnant air in air-conditioned spaces like offices or even hospitals and clinics.

What Are the Healing Properties of Dendritic Agate?

Just like Botswana Agate, Dendritic Agate is a grounding and uplifting stone that helps a person keep in touch with reality and stay positive no matter how stressful life can get.

Do you plan on moving to a new place? Or perhaps you’re contemplating switching careers to something more in tune with your interests? As a powerful transformation stone, Dendritic Agate is the perfect aid for those going through some major changes in their lives. It helps prevent major upswings and downswings in one’s mood and metaphysical state by balancing the heart, mind, and soul.

In addition, Dendritic Agate also improves self-reflection, especially in meditation. It opens the mind to necessary changes that must occur for growth and it gently guides the metaphysical body-heart, mind, and soul-towards its goal. Dendritic Agate is also an excellent healing amulet for those who’ve gone through major emotional strains or boundary violations growing up. Trauma is not an easy thing to go through, and professional help will still be needed, but a companion stone that vibrates with the same frequency as emotional healing is very helpful.

For many whose life changes aren’t going according to their plan, Dendritic Agate calms them down and helps them overcome bitterness and negativity in their heart. After all, things don’t happen without reason, and so it’s very important to listen and speak out one’s truth after close introspection.

What Are the Chakra Healing Benefits of Dendritic Agate?

These two chakras need to stay balanced and in touch with each other for very obvious reasons. An unstable Root Chakra means a lethargic and unmotivated existence, while an unstable Crown Chakra means being disconnected from the body and with material existence.

The Heart Chakra, on the other hand, is the seat of one’s emotion and connection with the self and people. This is where love is learned and expressed primarily for the self, the whole of creation, and the rest of the universe.

Dendritic Agate makes sure that all connections to the outside world and with the self stay healthy and balanced. So if you’re feeling out of touch, you might need to meditate with Dendritic Agate.

Dendritic Agate is neither a traditional nor a natural birthstone because it’s primarily clear and without color. Traditional and natural birthstones heavily rely on the base color of the stone, and most clear or colorless crystals don’t have a specific date attached to them.

However, just like most Agates, Dendritic Agate is the Zodiac stone for Geminis (May 21st -June 21st). Being mutable (changing) air signs, Geminis are experts at blending in with any group. They get along with other people nicely and they’re one of the most emotionally intelligent signs. They’re quick-witted and enthusiastic about almost anything and they’re able to move through life with optimism.

Dendritic Agate can help Geminis temper their words and actions. Sometimes, these people can share too much information that they don’t have the authority to share. So it’s helpful to have a soothing, gentle stone that can help them choose their words and mend their relationships with people they might have once offended.

Dendritic Agate imparts the strong and stable energies of the metal element and the wood element.

The metal element rules over intelligence, healing, and creativity and can inspire concentration and determination in a person. This element is responsible for governing the Northwest and Western areas of a home or space. It’s particularly helpful in the “Helpful people and Blessings” area as well as the “Travel” area and the “Creativity and Children” area.

On the other hand, the wood element is responsible for growth expansion, new beginnings, and health. A stone infused with powerful wood element energy can enhance vitality and usher in abundance into a home or space. Place your Dendritic Agate in the Eastern or Southeastern areas of your home to help boost your “Family and Health” area as well as your “Prosperity and Abundance” areas.