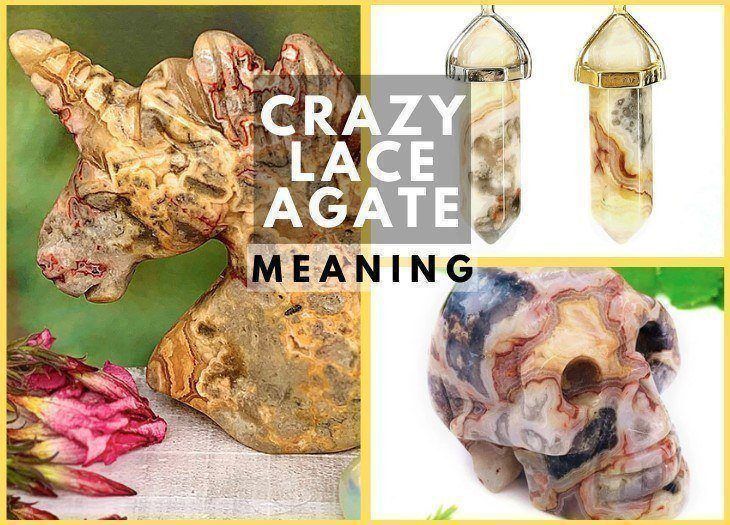 Crazy Lace Agate’s swirling browns, pinks, whites, and yellows draw everyone into its world of dancing and laughter. Crazy Lace Agate is a type of banded Chalcedony that’s primarily found in Mexico. Agates are transparent to translucent stones made up of micro-crystalline Quartz. These stones are known for coming in a variety of swirls, colors, patterns, and inclusions. They’re also known for giving off powerful energy in a very gentle and non-overwhelming way. Agates are protective and nourishing and have qualities specific to the color or pattern they come in.

But Crazy Lace Agate, in particular, isn’t a stone of protection. Function-wise, it’s known as the stone of support and encouragement. Its bands of white, black, gray, gold, scarlet, and red earn it the name, “Earth Rainbow,” because these are the colors that the earth naturally produces. Crazy Lace Agate is primarily used as a talisman and an ornament by many people because of its many healing and chakra balancing properties.

What Are the Healing Properties of Crazy Lace Agate?

Due to its emotional healing properties, Crazy Lace Agate is called the “Laughter Stone” or “Happy Lace”. This stone is known to give joy to anyone who wears or carries it. It’s known to dispel fears and absorb emotional pain. The spirited energy it carries gives people pure joy, despite all the worries and doubts in one’s heart. The happiness it imparts isn’t superficial.

Crazy Lace Agate addresses the root cause of sadness—one’s perspective on life. By supporting a person and making them see the beautiful things in life that one should be grateful for, that person’s perspective on things change. This brings about a healthy optimism and gusto for life which, in this day and age, is much needed by everyone.

Spiritually, Crazy Lace Agate is known to protect the bearer from negative vibrations and toxic auras. Some even use it as a stone to help see past worlds and spirits. Wearing Crazy Lace Agate jewelry is also said to help the wearer overcome depression and despair when worn near the heart or throat.

What Are the Chakra Healing Benefits of Crazy Lace Agate?

Crazy Lace Agate is said to stimulate and balance the Third Eye Chakra, which is the seat of a person’s perception, consciousness, dreams, and ideas. Located on one’s forehead, the Third Eye Chakra controls the energy flow of the entire body, as well as one’s intuition and foresight. This chakra point is responsible for all cognitive functions, awake or asleep. Crazy Lace Agate helps ensure that people’s cognitive functions work for their own benefit.

The Laughter Stone can also be used to stimulate the Crown Chakra, the seat of one’s spirituality, universal connection, inner peace, and wisdom. This chakra point is located on the top of the head and as its name suggests, it’s the fountainhead of one’s belief and spirituality. The power and energy a person’s Crown Chakraemits maintain that person’s individuality amidst the vast ocean of universal consciousness to which it’s connected to. Crazy Lace Agate helps keep a person connected to the universe, all while keeping them distinct from the many voices and manifestations of the universe.

As for its Zodiac significance, most, if not all Agates are the Zodiac stones for those born under the Zodiac sign Gemini (May 21st– June 20th). Geminis are flexible, talkative, and are quick thinkers. But they can also be nervous and can sometimes have incredible mood swings. Crazy Lace Agate helps them achieve clarity, calmness, and joy when they need it most.