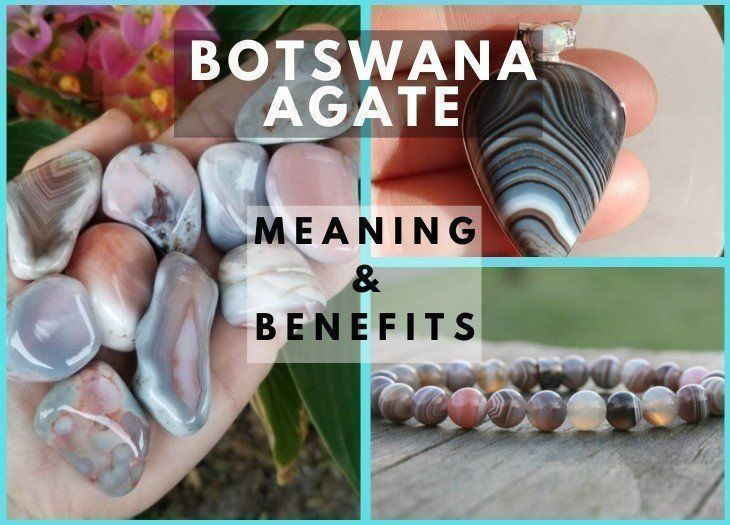 Named after the African nation from where it’s primarily found, Botswana Agate is a comforting and familiar presence in anyone’s collection. Its pink, brown, and gray bands remind one of soft earth tones and cozy sunsets. Botswana Agate is a variety of banded chalcedony that’s formed from lava flowing in waves in lower igneous rock layers. Usually, other Agates are formed when lava flows down mountainous volcanoes. The lava flow that forms Botswana Agates gives them their signature extra fine banding, that’s why it’s considered royalty among Agates.

Botswana Agate is also known as the Fortification Agate. Instead of letting its owner dwell on hardships, difficulties, and negative emotions, Botswana Agate gives them all the love, support, and strength needed to look for solutions and answers. Some people also call Botswana Agates the “Sunset Stone”. It’s said that the warm, familiar energy that it emits brings comfort to people in dark, lonely nights.

This stone is also typically used in African fertility ceremonies to encourage fertility and potency so couples can conceive and raise strong and healthy children. Finding a Botswana Agate with an “eye” is also said to be lucky because it protects the owner as well.

What Are the Healing Properties of Botswana Agate?

As mentioned above, Botswana Agate is a particularly comforting and protective stone. It balances emotional, physical, and intellectual energy. As with all Agates, Botswana Agate also helps its owner reach inner stability and maturity while also encouraging security and self-confidence. The stone is particularly soothing for lonely and grieving people as it helps overcome depression. Through its eye, it lets you see the bigger picture in situations and lets you release repressed feelings and emotions that have been holding you back. Some have even used Botswana Agate to help them treat their addictions.

In meditation, Botswana Agate is particularly helpful in centering yourself. If you’re living in a stressful household, gridding your house with this stone might help calm things down a bit. If you plan on using it for your own crystal grid, this can be used as a component of the outer, barrier stones since it also serves as a receptacle for negative energy and toxicity.

What Are the Chakra Healing Benefits of Botswana Agate?

Botswana Agate is particularly effective at balancing and healing the Crown and Third Eye Chakras, though people also use it to stimulate their Base Chakra.

The Crown Chakra is where our consciousness converges with that of the universal force—it connects our corporeal body to the eternal and divine. On the other hand, the Third Eye Chakra is the seat of our perception and intuition—our intelligence and all our mental faculties, the fundamental and even the metaphysical.

Balancing these chakra points using Botswana Agate means that our intentions and our aspirations for a higher self will be clearer. The mind will open up itself to the universal truth and use that information to make decisions that could potentially put one’s life in a positive upswing.

Meanwhile, those who use Botswana Agate to balance their Base Chakra most likely need a boost for their lethargy and disconnect with both the physical and spiritual world. This stone not only does that, but it also rekindles their fervor for life and gives them security and independence to live life as they see fit.

Botswana Agate is not a traditional birthstone, however, light red or pink varieties of this Agate rule over those who were born in the middle of autumn (October 22nd– November 20th). Botswana Agates are known to bring them energy, courage, passion, and even love.

On the other hand, Botswana Agate is a particularly helpful stone for those born under the Zodiac sign Scorpio (October 23rd– November 22nd). Scorpios are intelligent, charming, and fiercely faithful although sometimes they can be impatient, possessive, and really secretive. They desire to control and are often mesmerizing people with great personalities.  Botswana Agate influences their intuition and reinforces their resilience, and can even temper their vengeful and sometimes overly sensual sides.

For Botswana Agates with predominantly pink layers, their fire energy shines brightest. This is the energy of heat, emotion, and passion. Ideally, pink  Botswana Agate stones should be placed in the south area or the fame and reputation area of a room. This will enhance the owner’s place in society and at home.

Mostly gray Botswana Agates impart the strong, intelligent, and creative energy of the metal element. These stones must be placed in the Northwest or Western areas of a room to influence their “Helpful people and Blessings” area, as well as their “Travel” and “Creativity and Children” areas of the home.

One of the oldest human settlements on the earth is located in Tsodilo Hills in Mashatu Reserve, Botswana. Thousands of rock paintings that date back to 1000-1800 BCE have been found in the area. Interestingly enough, this is in the same region where the Botswana Agate is found.

In some stories, the indigenous peoples of Botswana believe a serpent resides around Solomon’s wall, a natural dike in Botswana. People who come too close are often captured by the serpent, never to be seen again.

Botswana Agate is cherished by some because it has the power to protect from any evil, negativity, injury, and bodily harm.